I started writing about the Banqiao Christmas light show in 2012. We’ve been every year since it started, although I haven’t written about it much over the years. I guess the point was to enjoy the show, not keep updates on it. 2017 deserves an update, though, and this is for two reasons: It is our fifth year attending and this was the second year we were invited on behalf of the New Taipei City Government.

This year’s light show, which New Taipei is now referring to as Christmasland, lasts for 39 days with a number of different activities to get guests in the holiday mood. I’ve never been prouder to live in Banqiao. There really isn’t anything else like it in Taiwan that I’ve seen. It beats Taipei’s Xinyi District hands-down.

In the past two years, Banqiao has hosted a ‘kick-off’ party each year called the Year-End Reception. The party is hosted by the New Taipei City Mayor, Dr. Eric Lilun Chu. This year, the Singapore Trade Office in Taipei was an event host for the reception and opening light show. Their representative, Mr. Simon Wong Wei Kuen can be seen in my photos dressed in white. Simon was charming. He insisted everyone call him Simon and he made sure he met all the guests at the reception. It was nice to meet him and learn a little more about what he does here.

You can see New Taipei City Mayor, Dr Chu, entering the reception below. This is the second time I’ve met him in person. He has always stopped to say a kind word or two and I always make point of telling him how much the city has changed in the past 11 years. At the end of the reception, Mayor Chu and Mr. Kuen asked everyone to meet in front of the stage for a photo that would be projected onto the buildings near Banciao Main Station right after we finished eating. (You’ll see this photo below and recognize it as soon as you get to it. This is the first year I’ve seen the reception party highlighted on the government building!)

In the last seven years, the Taipei Main Station area has changed dramatically, and it was in 2012 that we took a stroll – an hour long walk – from our home to Banqiao Main Station to see the Christmas light show. Each year we’ve continued to go and be impressed by the never-ending changes this city is seeing.

Over the past four years, I’ve been volunteering my time with the Canadian Chamber of Commerce in Taiwan. The last two years, I’ve been invited to some rather unique events because of my work with the Chamber, and I’ve been able to witness a different side of the Banqiao Christmas Light Show. 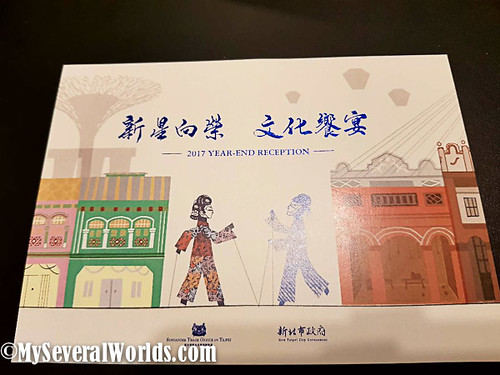 Christmasland kicked off on November 24, 2017 with the city reception for it on December 5, 2017, which is what we attended this year.

The entire event ends on January 1, 2018, so this is your last warning to get there before all of it is pulled down.

From Taipei City Plaza to New Banqiao Central Park, Banqiao Station Building and the Banqiao Station Front Square, you can see a holidazzle explosion of Christmas delights, including culinary treats, entertainment, shopping, twinkle lights everywhere and Taiwan’s tallest Christmas tree. (I’m not sure about that last statement. The Grand Hyatt’s Christmas Tree could give any tree in town a run for its money. I’m curious to know if they’re the same height or not. The Banqiao Tree offers something a little less traditional than other Christmas trees in Taiwan. It lights up with a magical 3D display of Christmas wonder each year, and it has always been our favorite part of this event.)

The Sparkling Lantern Area in front of the New Station features dancing Christmas lights that have been expanded to all four areas I mentioned above, so visitors will see twinkling lights everywhere, a Santa Bear stage and a glittering Christmas tree.

A favorite among children, Poporo the Little Penguin brings his Arctic homeland to Taiwan for children to enjoy. You’ll also see a diverse range of children’s cartoons, including: Cheburashka, Poli, Pororo, and Tayo. These characters lead children through various interactive activities with storytelling, singing, dancing, gift giveaways and photo booths.

Christmasland is a land that everyone of any age can enjoy.

As long term residents of Banqiao, New Taipei – we have lived here for over a decade – we’ve witnessed a lot of changes here. When John and I first moved here in 2006, Banqiao, or as I like to refer to it, the ‘Ciao, was known as the ‘ghetto of New Taipei’.

The only recognizable structures in the area were the train station, FE21 and the river park. Everything else was still a hodge-podge of mixed up alleys and street carts, and traffic is the same (insane) as it has always been. Those alleys are still here and just as nutty as ever, but that’s what makes Banqiao unique in my eyes. We’re seeing all of these new buildings and attractions added to the city while retaining Banqiao’s original character and charm. (I quite liked the ghetto as it was in 2007. No complaints here.)

Thanks to the city’s efforts, Banqiao has been upgraded and turned into an upscale city that is simply gorgeous. It’s every bit as nice as Xinyi near Taipei 101 and it’s much closer for us – just a 10-minute taxi ride away.

Back when the Christmas light show first started, John and I used to walk from our building on the Dahan River to Banqiao Main Station to see all the lights.

These past two years we’ve cabbed to the year-end party to avoid me having to walk. This allowed me to save energy to snack on some of the delicious traditional delights inside the reception. While downing a few Singapore beers, we munched our way through some tasty Taiwanese munchies, and as all this was happening, we saw new faces and old coming in to join the festive holiday spirit.

There were lots of activities for kids, and the miniature MRT system that went around a train track carrying desserts was a huge fan with kids and adults alike. 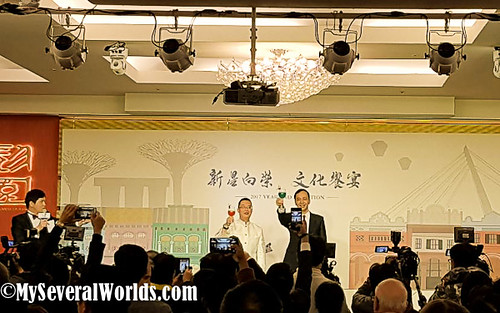 Here, we can see the hosts of the evening: Mr. Simon Wong Wei Kuen from the Singapore Trade Office in Taipei is on the left and New Taipei City Mayor, Dr. Eric Lilun Chu is on the right. We had several toasts for the year and for the city’s success. Mr. Kuen and Mr. Chu did an excellent job of meeting and greeting everyone at the reception. 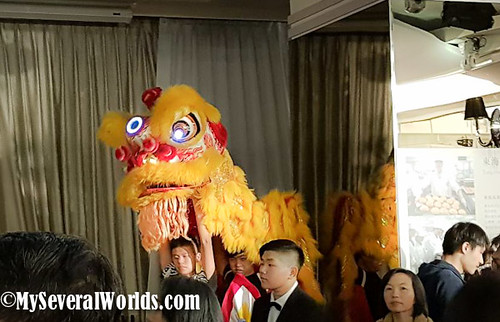 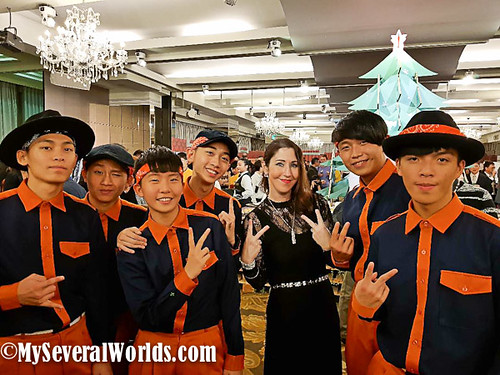 There were also some amazing performances, including a group of BBoy dancers. That was the only photo I took of me that night. (Apologies for the quality of my images. I did not take my big camera that evening because I knew I’d have to carry it for three hours.) 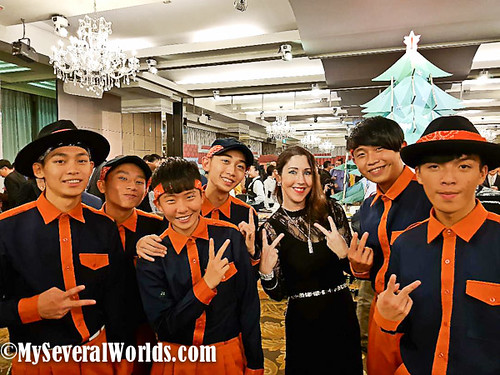 Unfortunately, over the past few years, I’ve not had the strength to wander around to see all the lights in this area. I feel fortunate that I’ve been invited to this party for the past two years because honestly, I wouldn’t be able to see it all if not for these invitations. Right after the reception, we were led all the way out to a special viewing area to watch the light show on the buildings and to watch the Christmas Tree light up like it does every year.

The square was packed with people wishing everyone good cheer and good luck for the coming year. Here is the photo I mentioned earlier that was taken inside the reception. John and I are at the back of the photo. (I’m not a fan of pushing to the front of crowds, even with a 6’9 giant accompanying me to part the way for me.)

For me, this reception event and the being able to view the first lighting event of the year was a huge highlight for me, and I’d like to thank the city of New Taipei City for inviting us once again to join them and for the amazing featured photo that was provided from last year’s event in 2016, courtesy of the Taiwan Tourism Bureau.

Taiwan always manages to set my heart on fire with something.

I am always grateful for the love and support and inclusion we receive from friends here in Taiwan, near and far.

Happy Holidays to all and best wishes from the Kellenberger Family to you for 2018. 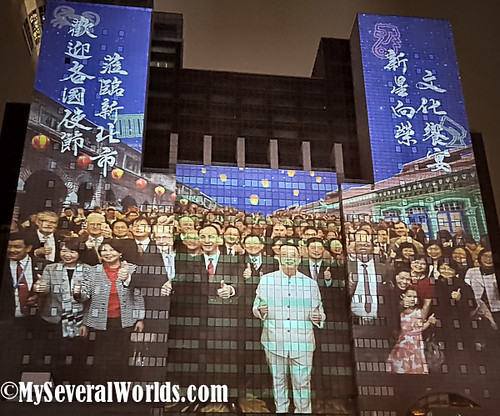 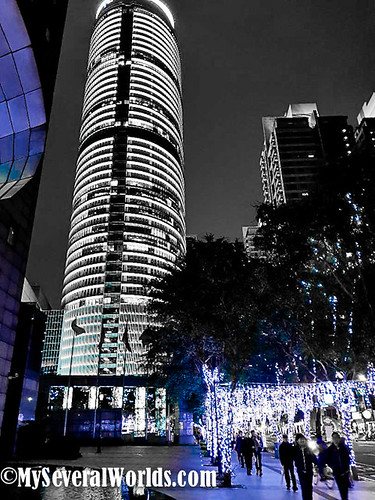 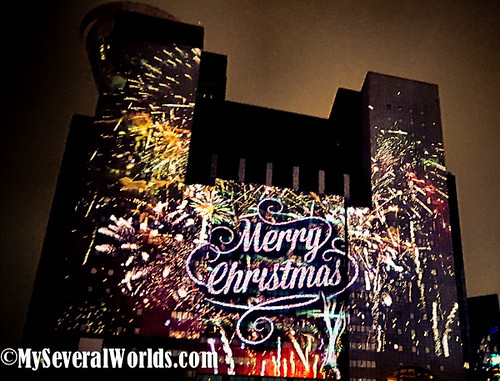 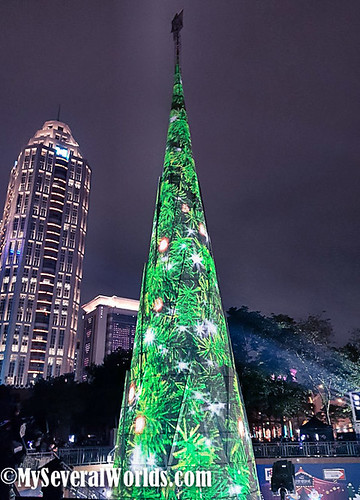 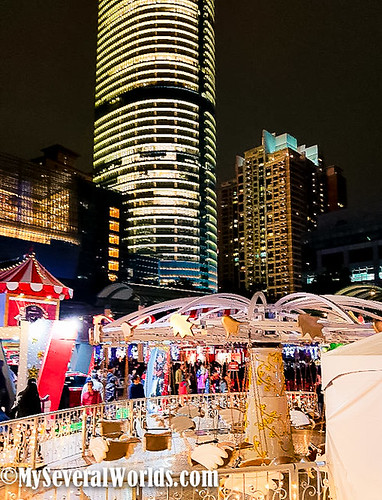 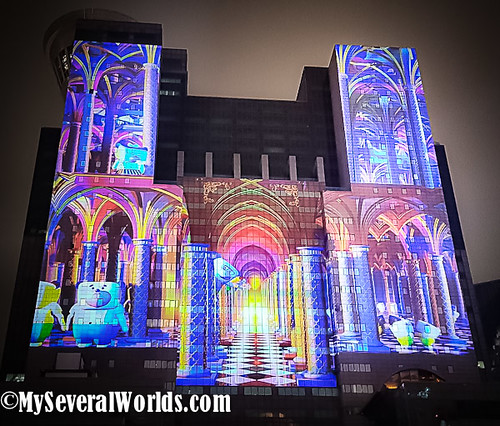